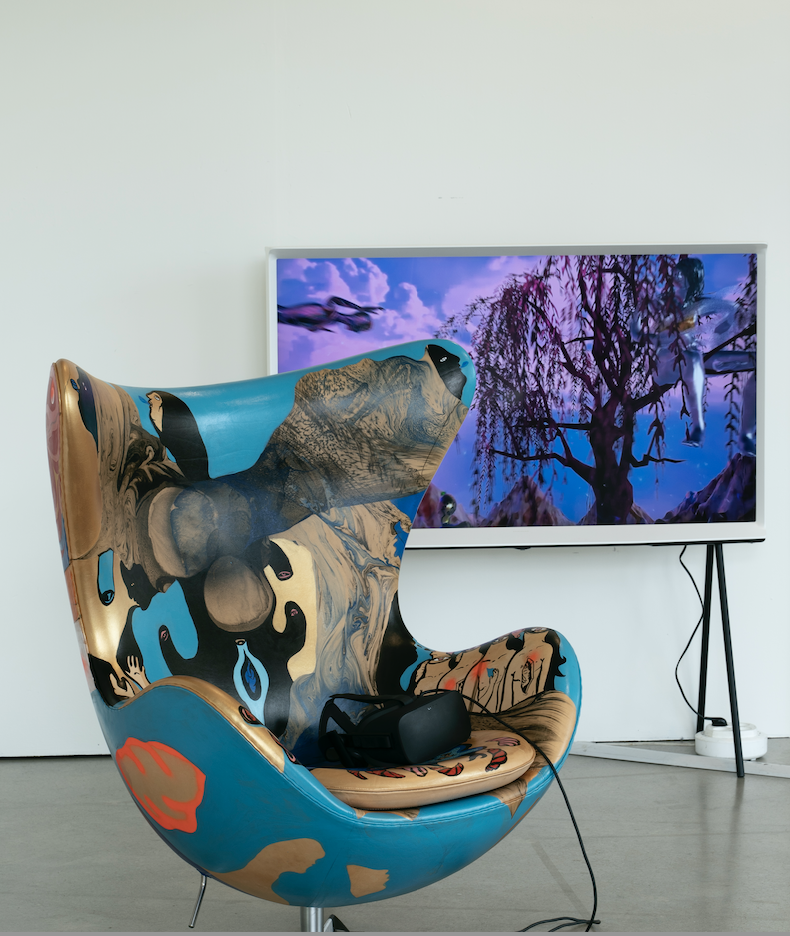 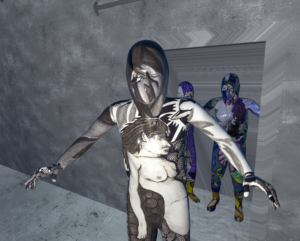 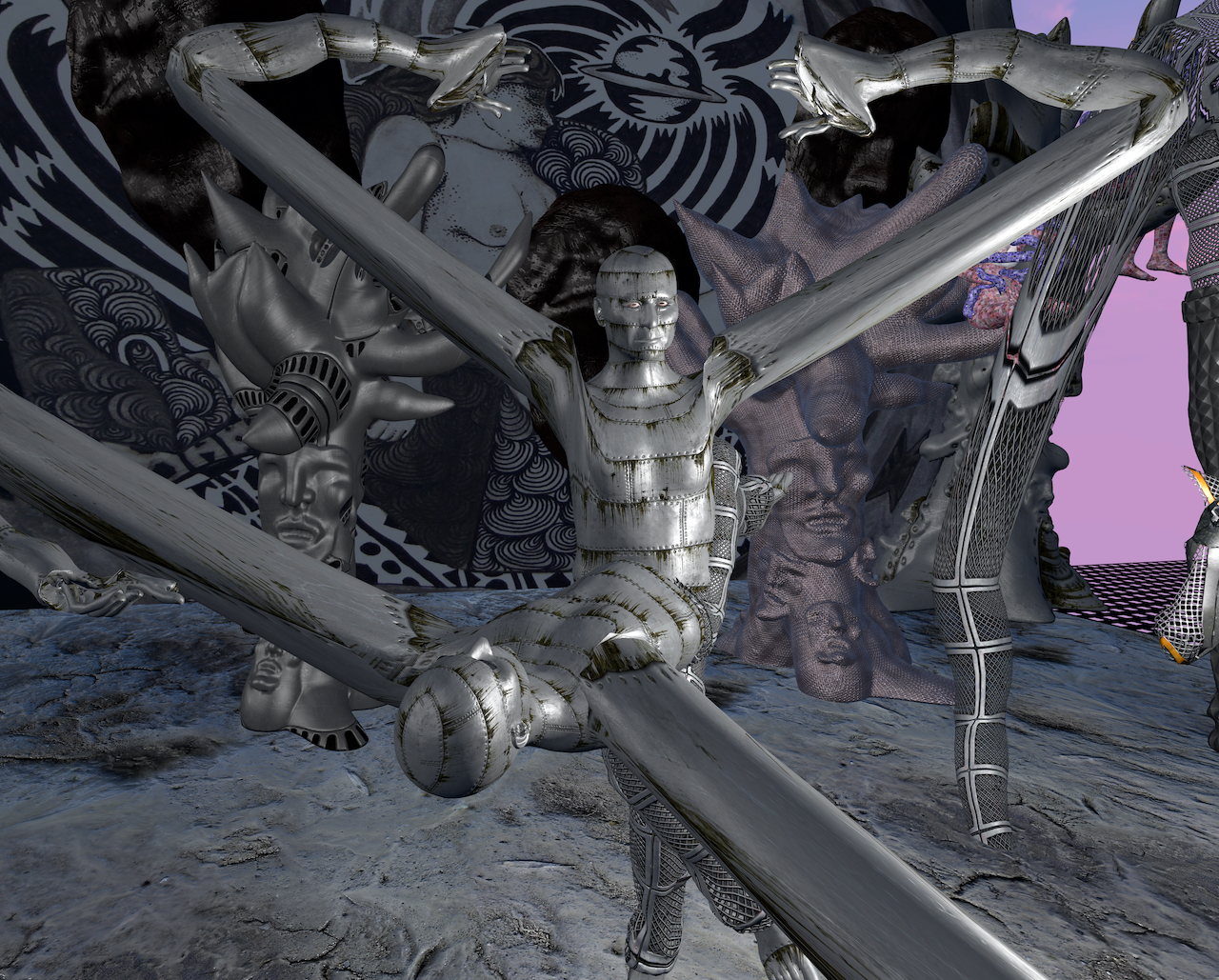 “A hallucinogenic vibe is imminent in Ida Kvetny’s Virtual Reality (VR) work Lithodendrum. Dancing figurines and deep techno grottoes make up for all the closed adventure parks and shopping malls during the corona quarantine. The viewer is delegated to experience this grotesque multi-sensory inferno. Kvetny’s work is the party we need to immerse ourselves into these times. Definitely, you could party in here for days, drifting away into a subconscious cosmography of Medusa-like avatars on saturated coral red cliffs with deep blue trees swaying in the wind. Like Neverland, it only exists if you believe in it, but is it the future? Kvetny’s reckless visual language and color fetichism makes this escapist experience close to an overdose, and thus, the work ends up questioning the very nature of VR: What kind of Disneyland are we immersing ourselves into, when the body’s capability of new sensations has become a crucial resource for contemporary forms of capitalism in digital creative industries? (Text by Ida Schyum).”

“Lithodendrum” is a cohesive installation comprising a 360-degree VR multi-sensory experience space. The work is founded in the nature philosopher Schelling’s perception of the universe as one big organism. Taking inspiration from the quotation: “the spirit sleeps in the rock, dreams in the plant, awakens in the animal and become conscious in Man”, a multimodal inner landscape is created where the body dissolves and the viewer flows above a rippling sea of colours and over a romantic landscape of coral red cliffs and deep blue trees swaying in the wind.

The universe is peopled by Medusa-like organisms moving restlessly in the landscape of 3D scanned ceramic objects and VR created symbolisms. A 3D soundscape pushes the viewer through different layers of nature, architecture and chambers of the subconscious. The work takes the form of a virtual journey comparative to an expedition in a collective subconscious. Here, digital tracks fuse with existing works and create an imagery where the viewer may reach a new level of immersion.

The physicality has the ability to titillate the viewer’s sense of reality and create a myth-like condition. The work reveals a non-linear story where associations and longing provokes a weave of visibility/invisibility, materiality/immateriality, mortality and infinity as well as forms of their representation. You are left with a sense of insight into a new cosmography, the be a participant in a spiritual journey or a sneak-peak into the hyperrealistic imagination of the future.

This artwork is a collaboration between an author ( Ida Marie Hede) and artist (Ida Kvetny). The author has written a text inspired by the artist’s work, where after the artist again has created a new digital work inspired by the words.

The Kvetny Galaxy III unfolds a “Surreal Universe”. The dense dazzled scenario feels, right out of a dystopian magical tale. 3D scanned ceramic sculptures, VR-sculpted animations and classical music lead you by the words into the galaxy. The psychedelic scenes are warped and dreamlike and dripping with saturated colors. There’s a dark feel and an open composition with amoebic creators with transparent souls. The landscape is strange and salute the metaverse. Meanwhile, the floating forms and deep blues call to mind Chagall. With an inspiration by Freud the viewer becomes an conduction archaeologist of the mind. Who attempts to uncover buried thoughts and feelings, to place them in context, to try to understand the relationships between them. The Kvetny Galaxy II looks something like an archaeologist’s lab turned upside down, with strange, unidentifiable organisms and artifacts left and right. Using an “ancient language that transcends time, place, and culture,” the nightmarish landscapes provoke thought and wonder and dread. Philosophical and artistic influences aside, this dark world is a way to connect the digital and the analogue world.

The Kvetny organism whispered-summoned all the things with which she wanted to populate the world: Billboards with 80s kissing mouths. Fighter amazones with aluminum lustre. The mime floated through a Möbius band. She invited everyone who wanted to change their eyes to look through the machine of the upholstered glasses. All the eyes of the city appeared. They looked through the dark of night at the flirting, outdated pictures. The pictures turned to the side and became things of several dimensions. The digital breath of the Kvetny organism had resuscitated every single old drawing in the world and now the drawings recirculated, crowding like small punks, thrown from parallel world to parallel world. They were cracked in precisely the right way. Corny and shimmering of old symbolic and new meanings. It was a great sorrow to the Kvetny organism that surfaces always froze and that pieces of cloth stopped flowing freely in the warm night winds. The brusque monuments barked at her, they were wild and stupid dogs. She left solidified old fathers on their piedestals. She was all in silver. As the organism that she was, she floated everywhere like oxygen and gave high fives to the other floaters.

Contact ida@kvetny.dk for information about the VR work The Kvetny Galaxy III 2019

In the interactive VR art work GAZE, the audience takes on a surreal and virtual art experience, where the oldest art forms such as the sculpture and the painting meet the future of the digital age. Through the work, the audience will be able to challenge the law of gravity andfloatin an inner landscape with recognizable urban elements and 3D scanned ceramic sculptures. The work is based on a kind of new psychedelic revolution with references to surrealism and automatic drawing – now as an experience in four dimensions, where the viewer will be able to move freely inside the work. The VR work is meant to be viewed either alone or in the context of a physical art installation containing a pair of rebuild panorama binoculars, which previously stood on an old tower’s platform in Copenhagen. Now it has been updated for VR and lets the viewer explore an ancient language that transcend times, places and cultures, in this digital age, – a GAZE of phenomena and archetypes at a time when concepts like collective subconsciousness, memory storage and artificial intelligence form a new conception of reality. 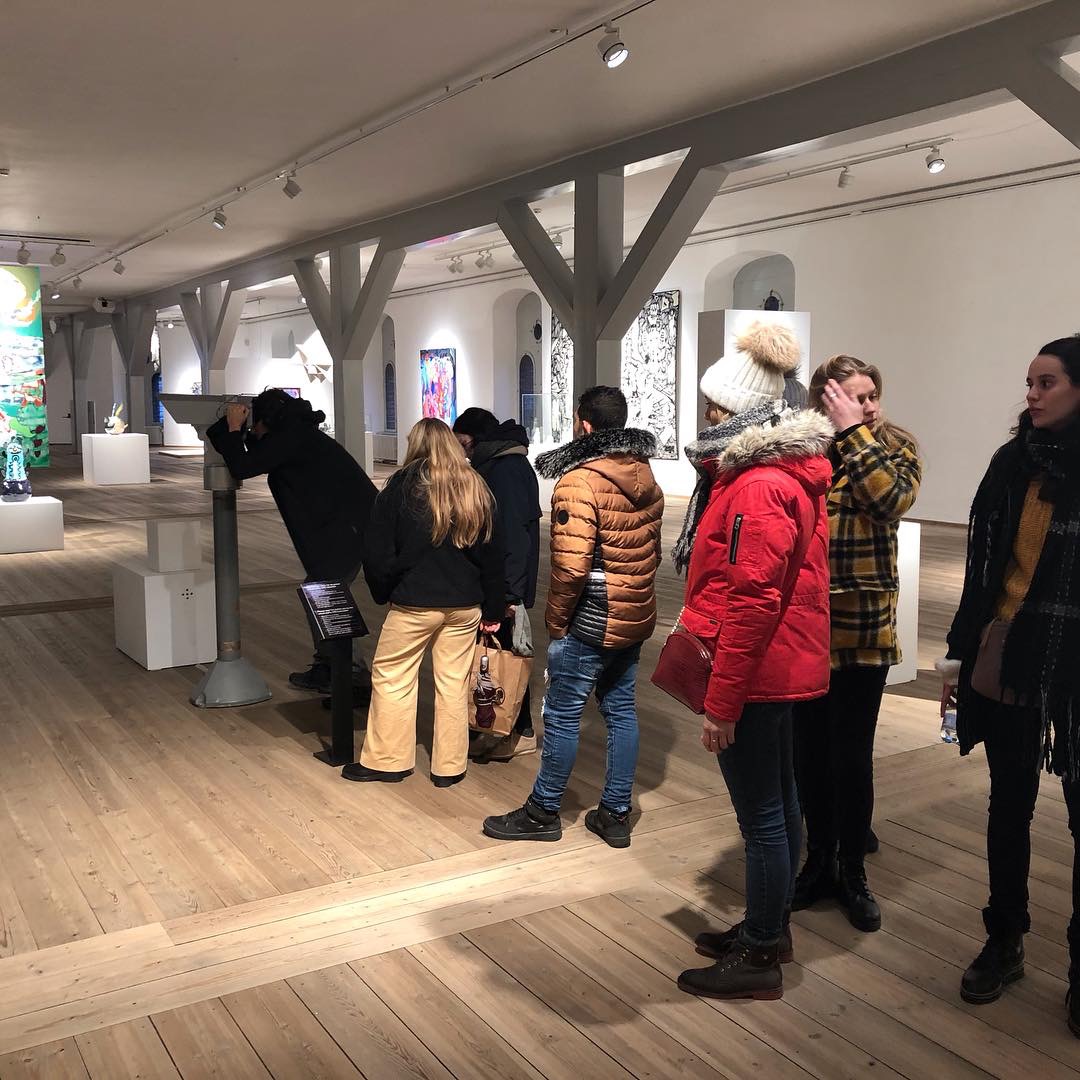 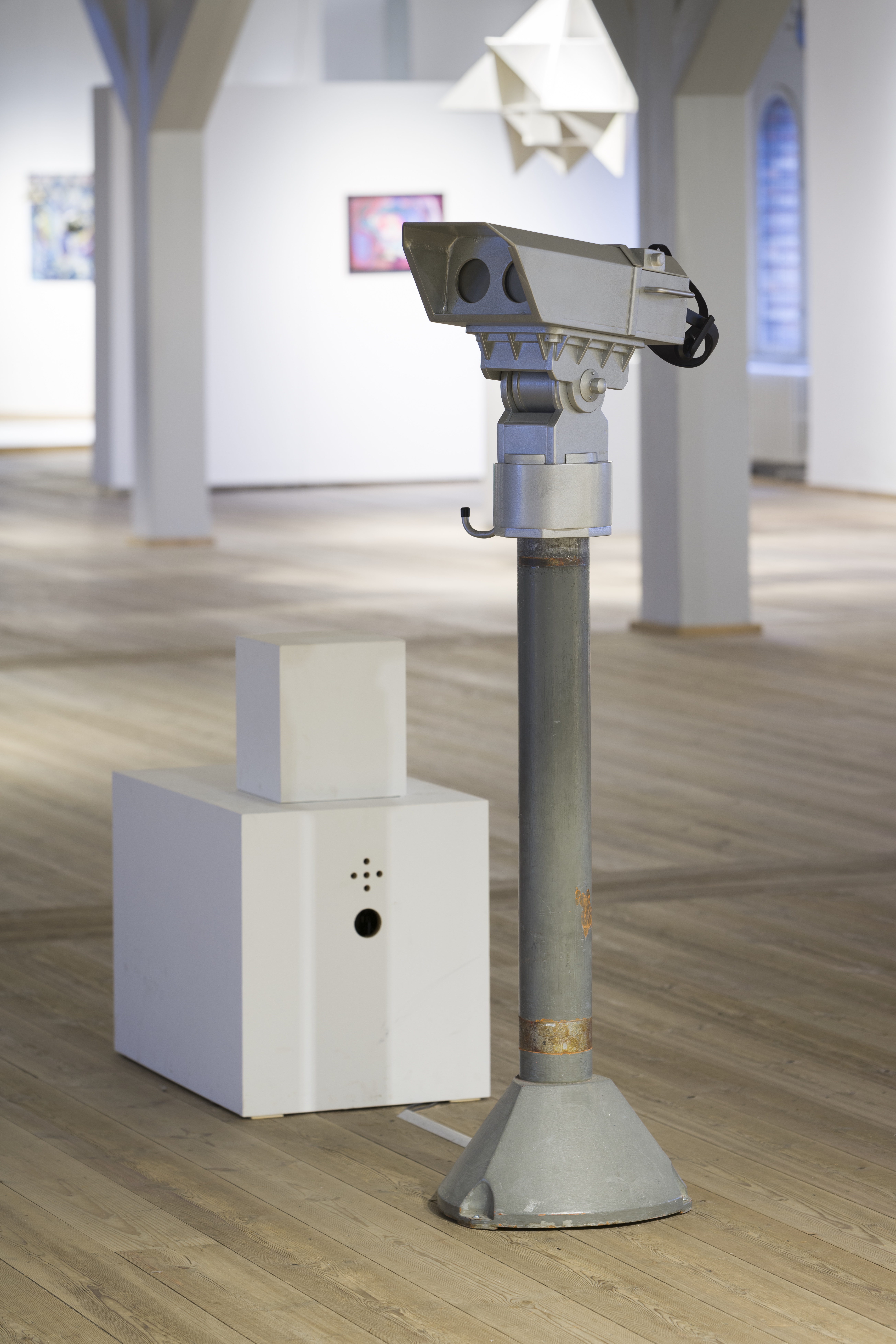 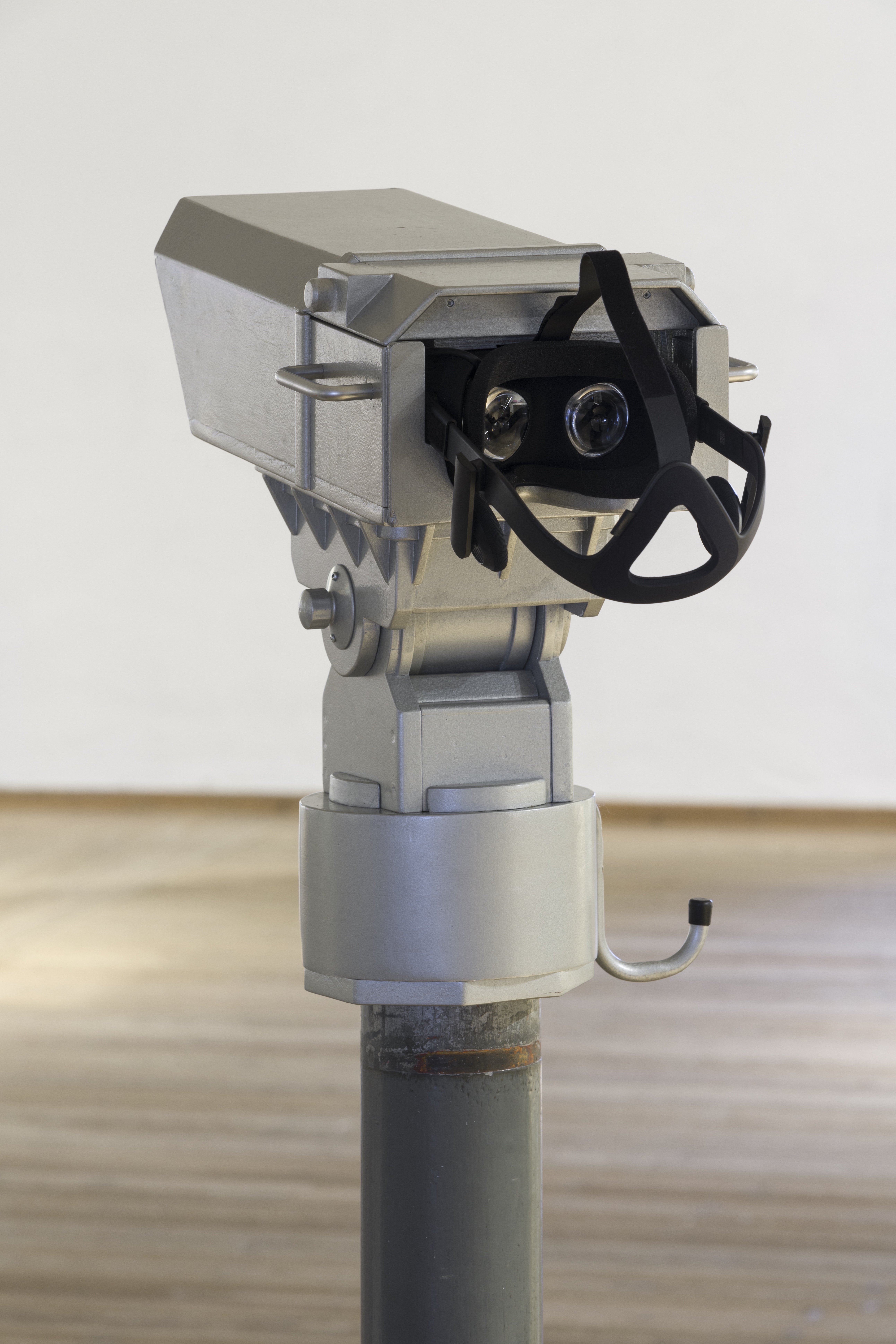 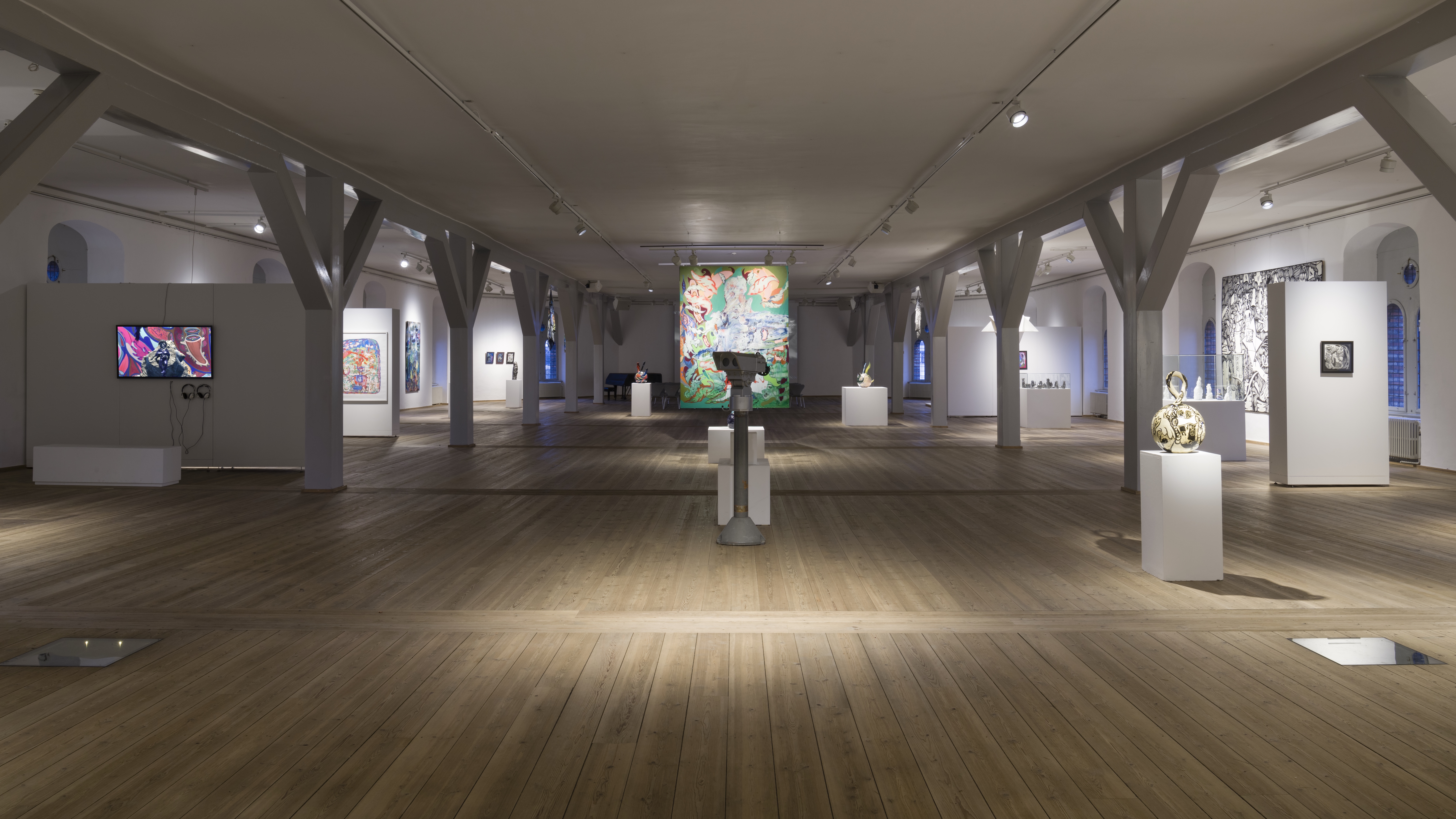 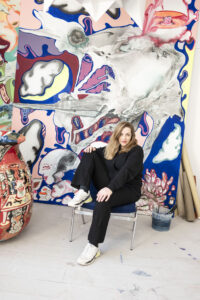