She holds a BA(hons) in Drawing and Painting (Edinburgh College of Art, 2006) and an MA Fine Art (Central Saint Martin’s College of Art and Design, London, 2007). She attended the Norfolk Summer School of Art at Yale University in 2005 (Ellen Battell Stoeckel Fellowship Grant).

Ida Kvetny has received several grants and awards, including The Royal Scottish Academy Painters Prize and The Maclaine Medal (young promising painter), Aage and Yelva Nimb Honoray Scholarship and Niels Wessel Baggers Foundation grant. Several of her projects have been supported by the Danish Art Council. In early 2012 Ida Kvetny was included in “Kraks Blå Bog” (Danish Who is Who).

Ida has been artist in residence at RAID projects in Los Angeles, at the San Cataldo Institution in Italy, 18 Street Art Center in Santa Monica, NARS Foundation of Art, NYC and Paris at Statens Legatbolig in Paris.

In 2018 Ida showed new digital art works at the Leroy Neiman Center, Chicago Art Institute, US. She was nominated to take part in FOKUS Video Festival at Nikolaj Kunsthal and exhibited at Torvaldsens Museum. She took part in CopenX were she did an artist talk about ‘Pioneering artforms through immersive experiences´.

In 2019 she had a  solo show at Rundetaarn “GAZE- surrealism in a digital age, where she showed a new Virtuel Reality installation alongside new paintings, sculptures, textiles, films and published a new artist book. In spring 2019 she showed her new films at Den Frie, DK and The Psychedelic & Transpersonal Film and Music Festival on Manhattan and  “Light and Furture International Film Festival”, in Houston, US. Her first VR work was exhibited at “The Peoples Film Festival” in NYC and showed at “VRHAM!”, DE. She participated in  “Ceramic Synopsis and digital media” at Overgaden, DK and did an workshop about  VR in contemporary Art, ArtHub Copehagen DK, Aug.

In May, 2020 Ida was be part of Extensions Vol 1 a group exhibition focusing on danish contemporary artist working in the extended field of classical art forms and new technologies. The exhibition is curated by Radar Contemporary and exhibition text by Ida Schyum. In June Ida’s new VR work Lithodendrum was selected out of in all 274 submitters from 36 countries to take part of VRHAM!  Lithodendrum was also nominated for the Lumen Prize, UK. In August she will take part in FED LER a group exhibit at Gl. Holtegaard, DK. In October she did a collaboration with musician Jeanett Albeck and Noah Rosanes who performed  live to her new XR film project EOS at Kunsthal Charlottenborg Art cinema.

In start 2021 Ida will have a site specifik XR installation of ceramic, textile and film projection at Nikolaj Kunsthal and in May take part in a group show at ARoS, Extensions vol III. 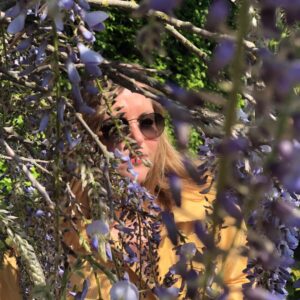 👩🏼‍🔧🏋️Working on a new VR work for

👁🥂Sneak peak from my new XR work inside the